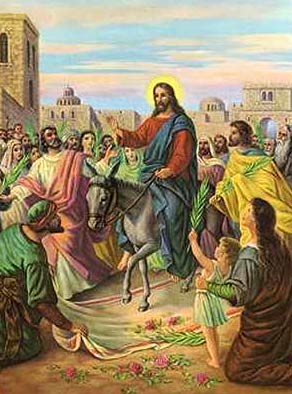 Palm Sunday commemorates the triumphal entrance of Christ into Jerusalem (Matthew 21: 1-9), when palm branches were placed in His path, before His arrest on Holy Thursday and His Crucifixion on Good Friday. It thus marks the beginning of Holy Week, the final week of Lent, and the week in which Christians celebrate the ...mystery of their salvation through Christ's Death and His Resurrection on Easter Sunday. Beginning in the fourth century in Jerusalem, Palm Sunday was marked by a procession of the faithful carrying palm branches, representing the Jews who celebrated Christ's entrance into Jerusalem. In the early centuries, the procession began on the Mount of the Ascension and proceeded to the Church of the Holy Cross. As the practice spread throughout the Christian world by the ninth century, the procession would begin in each church with the blessing of palms, proceed outside the church, and then return to the church for the reading of the Passion according to the Gospel of Matthew. The faithful would continue to hold the palms during the reading of the Passion. In this way, they would recall that many of the same people who greeted Christ with shouts of joy on Palm Sunday would call for His Death on Good Friday — a powerful reminder of our own weakness and the sinfulness that causes us to reject Christ. The faithful have traditionally decorated their houses with the palms from Palm Sunday, and, in many countries, a custom developed of weaving the palms into crosses that were placed on home altars or other places of prayer. Since the palms have been blessed, they should not simply be discarded; rather, the faithful return them to their local parish in the weeks before Lent, to be burned and used as the ashes for Ash Wednesday.
.
Posted by †Seán Manchester at 02:23 No comments: 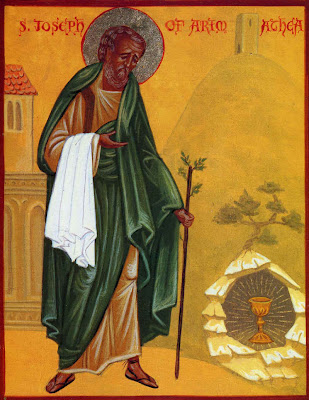 St Joseph of Arimathea was a disciple of Jesus, probably ever since Christ's first preaching in Judea (John 2: 23), but he did not declare himself as such "for fear of the Jews" (John 19: 38). On account of this secret allegiance to Jesus, he did not consent to His condemnation by the Sanhedrin (Luke 23: 51), and was most likely absent from the meeting which sentenced Jesus to death (Mark 14: 64). The Crucifixion of the Master quickened Joseph's faith and love, and suggested to him that he should provide for Christ's burial before the Sabbath began. Unmindful therefore of all personal danger, a danger which was indeed considerable under the circumstances, he boldly requested from Pilate the Body of Jesus, and was successful in his request (Mark 15: 43-45). Once in possession of this sacred treasure, he — together with Nicodemus, whom his courage had likewise emboldened, and who brought abundant spices — wrapped up Christ's Body in fine linen and grave bands, laid it in his own tomb, new and yet unused, and hewn out of a rock in a neighbouring garden, and withdrew after rolling a great stone to the opening of the sepulchre (Matthew 27: 59, 60; Mark 15: 46; Luke 23: 53; John 19: 38-42). Thus was fulfilled Isaiah's prediction that the grave of the Messiah would be with a rich man (Isaiah 53: 9). The Greek Church celebrates the feast of St Joseph of Arimathea on July 31st, and the Catholic Church on March 17th. Additional details are found concerning Joseph in the apocryphal Acta Pilati. There is also apocryphal legend telling of Joseph accompaning the Apostle Philip, Lazarus, Mary Magdalene and others on a preaching mission to Gaul. Lazarus and Mary stayed in Marseilles, while the others travelled north. At the English Channel, Philip sent Joseph, with twelve disciples, to establish Christianity in the most far-flung corner of the Roman Empire, the British Isles. The year AD 63 is commonly given for this event, with AD 37 sometimes being put forth as an alternative. Comprehensive coverage of this is found in a book on the subject found at this link:
http://www.holygrail-church.fsnet.co.uk/Grail%20Church%20Book.htm 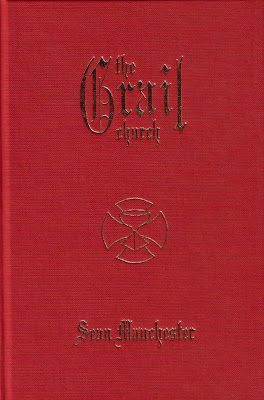